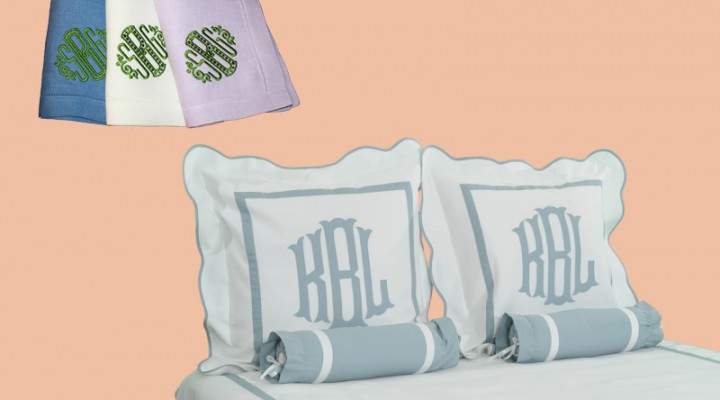 From as far back as the classical period, the practice of identifying a person or family by their initials has been used; in the eighteenth century this evolved into the treasured art of monogramming linens.

In these days of mass production, it is always a delight to own something that has been personalised. The tradition of monogramming linens allows just such an opportunity to make a household item into a romantic keepsake, or even a family heirloom. How utterly romantic for a newly-wed wife to lay her head on a pillow where her initials are entwined with those of her new husband; or to see the family’s initials monogrammed onto crisp white table linen presented as a special anniversary gift and saved for formal Sunday lunches and dinner-party occasions. Monogramming linen raises what would otherwise be an everyday object into a treasured and very personal possession.

The tradition of marking items with individual or combined letters stems as far back as the classical Greek and Roman periods. In ancient civilisations, an initial or a collection of letters, either stamped separately or as an entwined symbol, was often used as identifying marks on coins or seals. These ciphers symbolised both secular rulers and ecclesiastic figures. Later, in the Middle Ages, ciphers were used by craftsmen, artists and traders to set apart their work from the competition. Heraldry has also been used for centuries as a way to identify members of nobility using a combination of letters.

The practice of monogramming household items became popular in England in the middle of the nineteenth century, explains Dr Clare Rose, Contextual Studies lecturer at the Royal School of Needlework. Before this time, the grand houses of England had multiple sets of linens, for the table, the bed and the wardrobe. Each piece would be cross-stitched with a discreet mark in red or black in a corner of the piece. These laundry marks, explains Dr Rose, would help the housekeeper to maintain an inventory of the linens and to identify which piece of underwear belonged to which member of the household. Whilst the master and lady of the house may have bed hangings or coverlets decorated with their initials, these were more like ciphers than the entwined embroidered monograms we see today. Around the same time as the sewing machine was invented, monogramming became more popular amongst the English middle classes. Women’s magazines began to include patterns for monograms in their pages and, in 1886, Thérèse de Dillmont wrote about monogramming in her comprehensive Encyclopedia of Needlework.

In Europe, the practice of monogramming linen was linked to the tradition of the trousseau, explains Anne Singer, who runs The Monogrammed Linen Shop. A newly-wed woman would bring to the marital home sets of linens marked with the interwoven initials of herself and her husband. Volga Linen suggest that a trousseau would include six pairs of sheets, three dozen table napkins, three table cloths, dish cloths and aprons. These sheets, table cloths and napkins were supposed to last them a lifetime, just like their marriage, so embroidering them with an indentifying mark was both practical and romantic. Whilst the trousseau was a rite of passage in Europe for centuries, monogramming only became fashionable in England during the eighteenth century, adds Singer.

Most of the traditional monograms were embroidered onto white linen using white thread, hence the terms whitework or Swiss embroidery. Much of it was originally completed by hand. The first step in the process of hand embroidery, explains Amanda Ewing, studio manager at the Royal School of Needlework, is to sketch out a design and trace it onto the fabric. Next, the design is outlined in split stitch. Traditional monograms stand proud of the surface of the linen. This is achieved by padding the shape using layer upon layer of cotton thread, sewn into the fabric in a split, running or chain stitch. To complete the effect, the monogram design is embroidered over again using silk thread and slanted satin stitch.

Although the majority of today’s monograms still follow the tradition of using white thread on a pale linen background, there are some historic examples where colour was applied. During the Victorian era, mourning widows may have been given handkerchiefs with the monogram stitched in sombre grey or black. In contrast, more elaborate designs could be gilded in metallic threads to add that extra touch of opulence. Today’s monograms are available in an array of fonts and colours. Volga Linen will embroider monograms, individual designs, logos or crests onto any of their linens, in a range of lettering styles and colours, with prices starting from around Ј6 a letter.

Much of today’s monogramming is achieved by machine rather than by hand. The typical English young lady today sadly lacks the skills to hand-embroider their own trousseau. Many companies, therefore, have to outsource their hand-embroidered work to needle-workers in mainland Europe, even Asia. This is one reason why it can take twice as long to deliver a hand-embroidered design than a piece which can be machine embroidered. Bespoke designs are generally more elaborate and therefore need to be hand embroidered. For those looking to learn the art of hand embroidery, try The Royal School of Needlework, who offer an extensive programme of day classes and, for the ambitious, diplomas and foundation degrees. Once adept with needle and thread, there are books, such as Victorian Alphabets, Monograms and Names, to provide authentic letterwork to replicate.

These days, what is described as monogramming is not strictly so. Purists would regard appliquéd designs, single initials, even whole names, as being an example of personalisation rather than monogramming. This may be so, but this is still a lovely way to make an ordinary item into an individual one.

The array of items to which this personalisation is applied has also expanded. Lucia Maria Poels, owner of Chia Maria, says her initialled, appliquéd cushions are popular as wedding gifts. Her embroidered linen hearts also make charming favours for bridesmaids. Anne Singer says the Monogrammed Linen Shop is often asked to monogram towels, bath robes, pillows, blankets and even toys for babies.