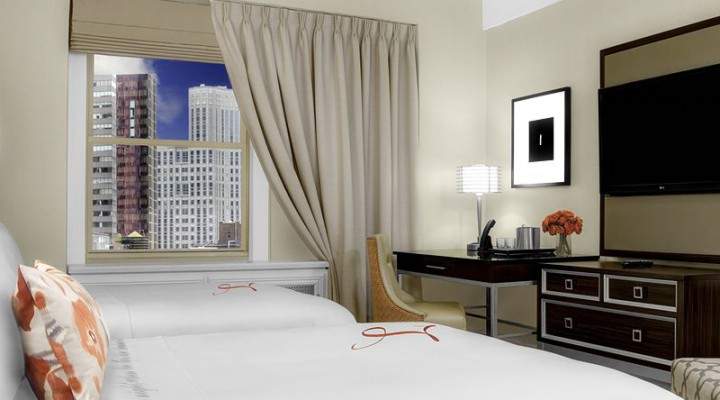 The 1920s: From Fitzgerald and Picasso to Stravinsky and Cole Porter, the world was bursting with artistic vitality, as youthful geniuses set about to change the world. It came to be known as the Jazz Age, for the music that offered eager listeners vibrancy, improvisation, surprise, and sensuality.

In design, Art Deco was taking flower in France, soon to bloom around the world. One of its earliest temples in New York was the Lexington hotel in Midtown Manhattan, created by iconic architects Schutze and Weaver, who soon after fashioned the Waldorf Astoria.

“From the Chrysler Building on,” says designer David Ashen, “this stretch of Lexington Avenue is the deco center of the city.”

So it was with a certain humility—and a great deal of excitement—that Ashen and his Long Island City, New York firm, dash design, took on the challenge of renovating the 725-room Lexington New York City—a new addition to the Autograph Collection— for the modern era, bringing a contemporary feel to the space while honoring its past.

While the architecture remained intact, Ashen made distinct changes in the public spaces: the two-story lobby was transformed from a “generic passageway” to one “with a sense of place, where you might want to sit, and where jazz artists could play”; the corridors and guestrooms were brightened; a bronze and black lacquer reception desk now fronts a feature wall with a 3D sculpture.

But the true homage to the Jazz Age is the hotel’s recently acquired art collection. curated by Portland, Oregon-based consultant Paige Powell, which fills the hotel with modern invention, color, and edginess.

The result is a fascinating, eclectic gallery that captures the eye at nearly every corner of the hotel, from public spaces to guestrooms. Some choices riff on music itself, such as Mao’s antic interpretation of musical compositions; others nod to the hotel’s fabled history, including an evocative photo of roses laid at Marilyn Monroe’s Grauman’s Chinese Theater footprints, a reminder that she and Joe DiMaggio called the Lexington home for an extended stay.

“Paige loves to shine a spotlight on young artists,” says Ashen, “so we’ve have great pieces by newcomers that we found at Affordable Art, as well as from Creative Growth, which supports disabled artists.”

Yet the works of the celebrated are included as well. Alba Clemente designed lobby screens, and Ruben Toledo created an expansive mural that wraps around two floors.

“I didn’t want to fake it out by recreating something historic,” he says, “so we chose to do a modern interpretation, to use colors and textures that hark back to the twenties without being literal. A Jazz Age hotel reimagined.”