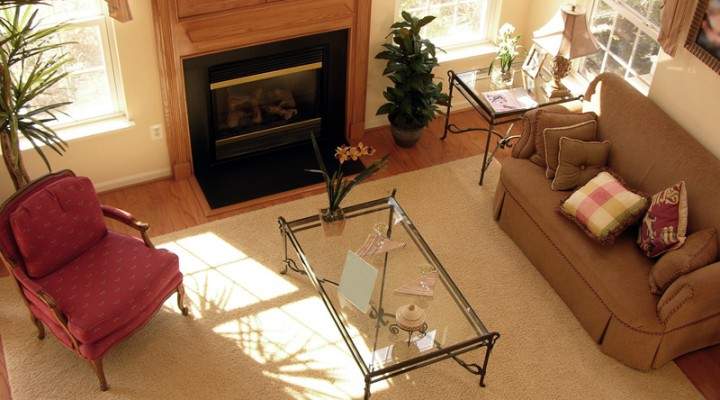 Classic french style and even a fireplace feature are brought up to date with contemporary materials and clean lines.

Kelvin Teo of Space Sense Studio is known For his graphic monochromatic interiors, yet when tasked with designing a modern French-inspired home, he nailed it on the head.

Louis and Ellane Kwang initially envisioned their four-room Design Build and Sell Scheme (DBSS) flat as a New York-styled loft. Being on the highest floor gave them the high ceiling, but Ellane had some misgivings.

“Though we love New York, the look is too raw for our liking. I wanted something classy yet modern”? – she says.

Having designed a modern Parisian flat years before, Kelvin proposed giving classic French aesthetics a fresh new look and the couple gladly agreed. Ellane set to work researching the elements of French design and furnished the designer with references. The hands-on homeowner even sketched out the internal layout of her wardrobe herself.

One thing Ellane was sceptical about was the “fireplace” Kelvin proposed for the design of the living room’s TV console. At first glance, his highly modem version doesn’t come across as a fireplace. Comprising two intersecting Ls – one black and one white – the structure incorporates storage for electronics and travel knick-knacks to keep the area clean and spare.

“It extends right up to the 3.6m-high ceiling, emphasising the height”, – says Kelvin.

Leading the eye up was a deliberate move on the designer’s part.

“Upon entry, I want visitors to be drawn to the concrete brick wall and the objects placed there”, – he says, – “Then, as they take in the living room, I want their eyes to be trained upwards and follow the vertical ‘chimney’ to the ceiling.”

This airy feeling is also captured in the glass-walled study, which was formerly a bedroom. This is Louis’ space and being a modernist, he wanted strong, clean lines and minimal decoration. Kelvin designed a series of thick black frames for the two glass walls, giving the room a strong presence. Inside, he kept it simple with more black and white – this time in the form of open shelves that taper off towards the ceiling. It’s no wonder that this is Louis’ favourite spot in the home; for Ellane, it’s her wardrobe.

The wardrobe is a fine example of how the couple compromised on their individual tastes to settle on a pairing that works well together. She yearned for slightly classic doors with moulding details, while he wished to go with sleek, embellishment-free glass. Kelvin gave them both what they wanted: His side of the wardrobe features two large panels of opaque glass mounted on a thin steel frame, while her side opposite has doors inset with wood moulding.

By keeping the colours monochromatic and laying a lush charcoal-grey carpet between the two sides, he married the two looks into a cohesive whole for the walk-in wardrobe. The luxurious finishing also gives the space a boutique-like feel. To maximise every centimetre of space, Kelvin built a boutique-style hanging rack and shelves above the bay window.

Says Ellane of the finished look, – “I envisioned something that would wow, and friends who have visited our home are impressed by it”, – she smiles.