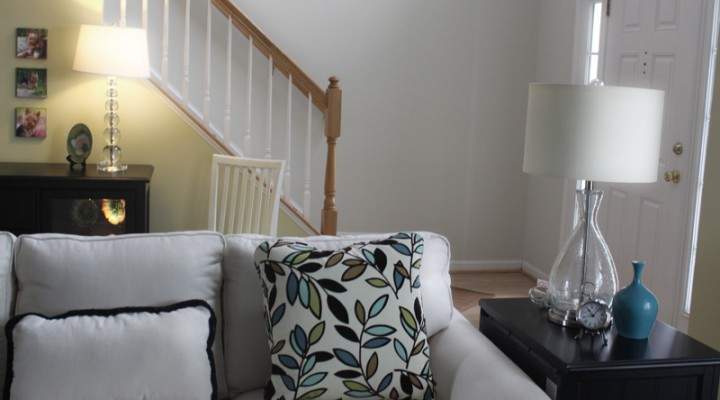 “Living in a rented property and not having a lot of money to spend means you have to be creative”, – says Deborah Gordon, whose inspirational black-and-white apartment is testament to her artistic skills and eye for a bargain.

Deborah and Richard, both from Glasgow, met five years ago just as Richard was about to move to Barcelona to teach English.

“I decided to go with him”, – she explains, – “but when I later discovered I was expecting Oliver, we came back and rented the first thing we could find, which was a cluttered, chintzy, cottage-style property and not to our taste. So when a friend offered to rent us this flat and was happy for us to do our own thing with it, we jumped at the chance”.

The third-floor apartment had a traditional interior with dark varnished floorboards and a neutral cream decor. But Deborah had her heart set on a Scandinavian look – light, white, simple, clean lines and an efficient use of space.

“It’s very much my style and fortunately Richard, who’s not really into interiors, also likes it. I follow a lot of Scandinavian design blogs and, inspired by their emphasis on minimalism and functionality, I parted with a lot of things we didn’t need. Even now, if I don’t absolutely love something, I get rid of it”.

A graduate of Dundee Art College, Deborah made up moodboards for all the rooms and started painting the walls using standard off-the-shelf matt white emulsion.

“Richard’s mum lent us her tall ladders as all the rooms have high ceilings”, – she says.

Far more arduous was transforming the floors, as they required sanding and then priming, followed by three coats of white floor paint.

“I’m a perfectionist”, – confesses Deborah, – “so the living room floor has since had another two coats and I’m always on guard when the boys are having juice or tomato and pasta dishes”.

The change in the spacious living-cum-dining room is dramatic – the all-white walls and floor contrast beautifully with the black fire surround, with its white marble inlay and hearth.

“The fireplace was already here and I merely went over the wooden surround with blackboard paint to give it a dense matt finish”, – Deborah says.

Had money been no object, Deborah would have liked a £3,000 designer Hay sofa. However, the high-street sofa she chose with loose covers in grey linen is a great alternative. And with her signature sense of style Deborah has teamed the white dining table with iconic Eames chairs in black. The boys’ bedroom is another monochromatic marvel, where inexpensive buys look like smart designer pieces once paired with Scandinavian bed linen, cushions, an Eames rocker from eBay, and a two-tier Kartell unit. Deborah finds most of her buys online, often going directly to Scandinavian home furnishing sites.

In the main bedroom there’s a practical computer work corner and every bit of space is put to good use, including the walls, which hold shelves and an eclectic selection of black-and-white prints.

“I love really strong, graphic artwork”, – says Deborah, who is skilled in the art of hanging pictures where they make the most impact.

It’s this enviable knack of knowing where and how to place things, and mixing budget-conscious furniture and accessories with designer pieces, that gives the family’s home an “expensive” look. A full-time mum, Deborah plans to return to her career when Oliver starts school, either in visual merchandising or as a magazine stylist.

While they’re happy for now, the couple also hope to buy their own home within the next few years.

“There’s a park nearby but we’d really like a garden for the boys”, – says Deborah, – “Richard doesn’t have a preference about what we buy but I’m not too keen on new houses. To get the features I like, it will have to be an older property, either in the town or the country, although I think Richard would like to move out of Glasgow. Who knows? Maybe we could even move to Sweden where I could really live the dream!”