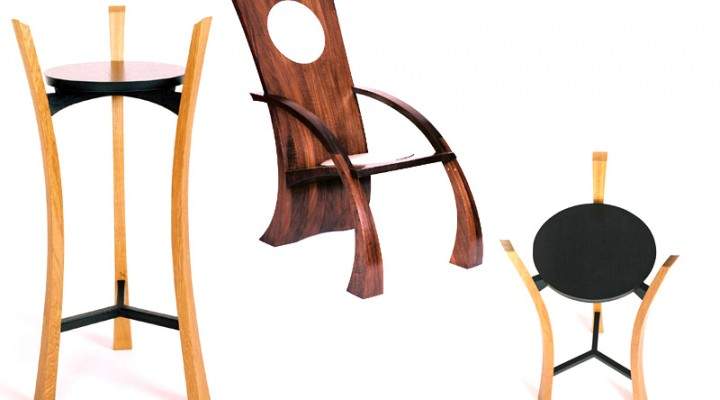 Erich’s career as a woodworker began over 30 years ago and has established him as a designer/maker of bespoke furniture whose work is shown all over the world.

After a stint teaching at secondary level where Erich was allowed to use the school’s woodworking facilities after hours, he found himself in Philadelphia in the 70s, involved in the cabinetry and joinery aspects of several large-scale urban renewal projects for a number of historic renovations. After a break taken with his partner, the painter M. Kern, Erich sailed around th Caribbean in a yacht. After returning to the US, he soon made name for himself as a bespoke furniture designer/maker for luxury yachts.

It was during this period of employment that’a definite style began to emerge in his work. The free-form ‘flow curves of the environment in which he spent nearly a decade working began be reflected in the work he was producing. In the fishing villages of North Carolina where he lived at the time, he learned the techniques common to wooden boat building including steam-bending, curved and stack lamination, vacuum bagging and veneering that were to become the tools of his trade.

Erich believes that it is impossible to understate the way in which his approach to design has evolved in light of his exposure to the nautical world. The fluid lines, which characterise so much of his recent work, reflect, to a large extent, his work in the boatbuilding world, where the straightedge and compass give way to the batten and the freehand curve.

He says, “The lines that characterise classic sailboats like those designed by the iconic American nautical architect, Nathaniel Herreshoff, show the marriage of form and function at its very best”.

As Erich started to undertake a number of residential commissions, he had more freedom to design as well as explore the use of some magnificent timbers native to that part of North America, such as hard and soft maple, cherry (Prunus), hickory, black walnut, sycamore and others.

Erich states, “It was the prize-winning pieces I created during this time that paved the pathway from the somewhat limiting, though lucrative, business of nautical furniture toward a practice based on the creation of fine furniture to my own designs”.

Now based in the west of Ireland, Erich has come to focus on producing smaller pieces, including jewellery boxes and chests, saving two or three larger pieces per year for exhibition and accepting commissions from clients. As he nearly always works alone and tends to eschew automated techniques, his work which is made and designed by himself, is truly personally handmade and finished.

The “Atlantic” and “Serendipity” chairs are examples of Erich’s exploration into the possibilities of stack lamination; another effort towards achieving greater freedom in the use of curvilinear forms.

Most of the timber Erich uses is locally sourced native Irish or European timber. He spends a lot of time selecting and drying the timber and has constructed a small kiln for the purpose, based on the designs of Ray Walsh, a County Clare chair maker. Once the brief for a given project has been established he makes pencil sketches – no CAD here -and then builds one or more maquettes, usually at a scale, large enough to accurately represent relationships and joinery situations while, in the case of commissioned work, giving the client an accurate representation of the finished product. Special joinery considerations are often resolved with full-scale mock-ups.

“It’s these sorts of procedures”, – says Erich, – “essential to nearly every project, that people tend to discount when they ask about the time required to make a piece of furniture”.

Erich’s work is most often shown at various craft fairs and exhibitions in Ireland and the UK. These include the National Crafts and Design Fair in Dublin; the Designers and Makers Exhibition in Banbridge, Northern Ireland; the Glucksman Craft Fair in Cork; The Contemporary Craft Fair in Bovey Tracey in Devon; The Celebration of Craftsmanship and Design in Cheltenham; Made by Hand exhibition in Wales and Designers in Wood, Utrecht, Netherlands. Examples of Erich’s work can also be seen at the Bluecoat Display Centre in Liverpool, Timothy Mark Bespoke Fine Furniture in London and Gallery in Dublin.

In recent years Erich has had notable success with a series of pieces both large and small in which a fluted motif has been employed. His fluted jewellery boxes have been recognised in the Irish National Craft Competition, winning second prize for furniture in 2010 and in the 2012 Celebration of Craftsmanship & Design, winning Highly Commended in The Worshipful Company of Furniture Makers’ Prize for Design. His “Fluted Blanket Chest” won the award for Best Use of British

Timber at the 2011 Celebration of Craftsmanship & Design exhibition.

Erich’s fascination with making things out of timber began in childhood and has continued with undiminished excitement as each project begins.

So what does this successful maker have in store after three decades creating unusual, handmade furniture?

“Sometimes I wish that I had the sophisticated machinery, the large air-conditioned workshop, the staff, the agent and, especially, the enormous of precious timber that many furniture makers have. But most of the time I’m quite happy to continue making my modest contribution to the art and to earn, hopefully, the respect of my colleagues and the appreciation and generosity of patrons who support my work.”

Well that sounds good enough to us.